A View from the Caucasus: Utah - Armenia Trade and Investment Opportunities

Ambassador Armen Baibourtian, Consul General of Armenia, will speak directly to Utah companies about opportunities in Armenia and prospects for doing business in Utah for Armenian companies. The sectors of interest for the country include agribusiness, information technology and telecommunications, chemical and pharmaceutical, mining and quarrying, energy, transportation, and tourism. Join us, along with the Governor's Office of Economic Opportunity and the Salt Lake Chamber, in welcoming Ambassador Armen Baibourtian while discovering new opportunities for your company.

Ambassador Armen Baibourtian holds the position of Consul General of Armenia in Los Angeles since September 2018, with consular jurisdiction spanning over all the western United States. This is his second tour of duty in California. He proudly holds the title of the first Armenian Consul General in Los Angeles (1995-1997). He has the top diplomatic rank of Ambassador Extraordinary and Plenipotentiary.
Armen Baibourtian is a career diplomat and scholar. He was a Professor of Political Science at the University of Massachusetts Amherst for 5 years (2014-2018). He worked earlier at the United Nations in the capacity of Senior Adviser to the United Nations Resident Coordinator and UNDP Resident Representative in Armenia (2008-2013). He became the first in Armenia to hold the prestigious Jean Monnet Chair of European Union Studies when teaching at the Center for European Studies at Yerevan State University. 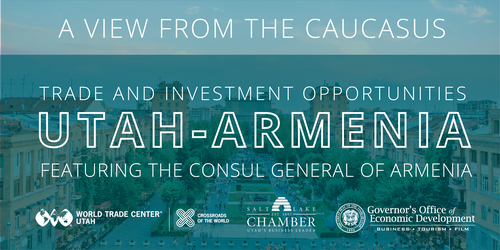